It was another of those Saturday afternoons. Wet and wild outside. The boys had all gone to see 'Monsters & Aliens' (thumbs up by all) and Ruby and I were home alone.

We were up in my studio and my plans of her sitting quietly (there's always a first) while I got on with preps for the impending were scuppered after several seconds. Ruby was interested in making something. This could have gone one of 2 ways. I could fight this as long as possible, determined not to lose valuable time, but get nowhere because Ruby wouldn't let up. Or give in and enjoy a bit of quality time with Ruby and worry later about what I had to do.

Obviously we did the latter.

Ruby wanted to make a bunting. Like the one in my studio. Not a glue and stick kind of bunting. A fully fledged sew with the machine kind.

First off was choosing the fabric (please don't want my Liberty fabric. Please, please, please) With a little guidance Ruby chose some well matched fabrics and we set to work. 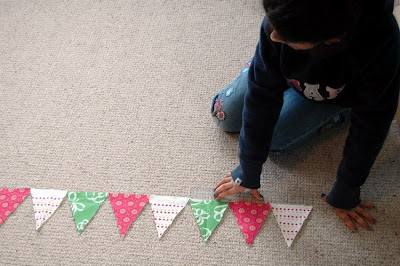 Ruby competently drew around the template, cut out all the triangles and began to line them up on the floor. She became quite meticulous in measuring them into place. (I SWEAR she can't ever have seen me do that. Could she?) 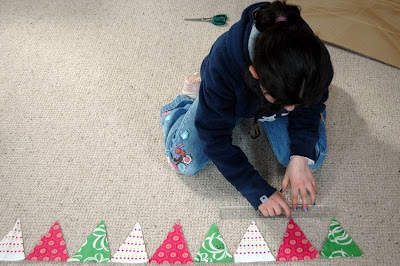 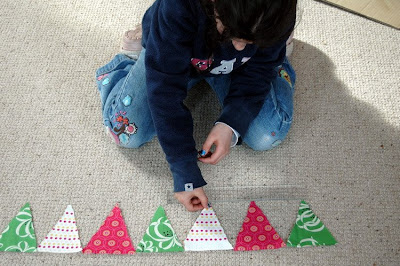 We then chose a nice pink gingham for the topping, after her rejecting my first 3 ideas. And I have to agree that this works far better than the (old, tired, trying to use up) fabrics that I suggested. 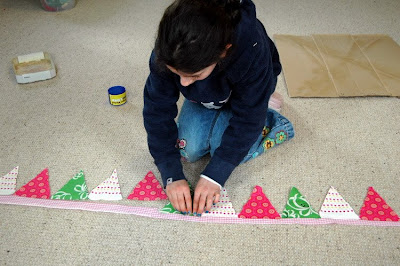 Onto the machine. I haven't actually braved letting Ruby loose on the machine by herself. I am a little bit frightened about that, to say the least. So her on the foot pedal, me feeding through and before we knew it, task completed and one hellava gorgeous bunting to show for our afternoon's toils. 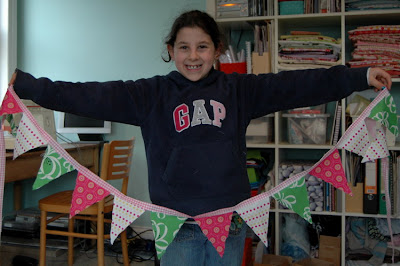 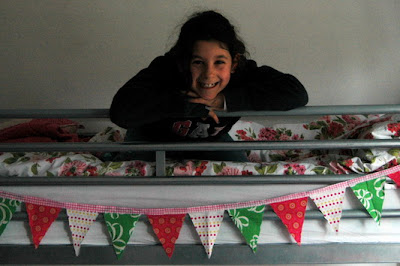 Me. Well, no work done. But I did add a little something to the tote, just while I was hanging around. 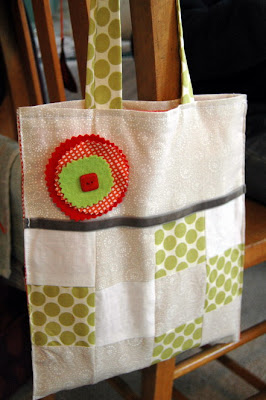 Hi Karen!
Many thanks for your lovely comment on my blog. I was at BCTF last year. Not attending this year, keeping a tight hold on the purse strings at the mo! Wishing you all the best for it though, hope you enjoy it and do well.
Lovely bunting by the way! ;0

Whts is those words 'Can I sew mummy' are so bittersweet?! I always have to fight the urge to say 'Maybe later'. It's always worth the effort.
Tell Ruby the bunting is gorgeous. x

This was so lovely to read, and all the pics are so illustrative! (That's a word, right?) Rubes has obviously inherited her mum's eye for fabric. x

The bunting is gorgeous! It sounds like you had a lovely afternoon!