it's still march (just) and here i am again with a quick round up of the rest of march.

i have started doing a monthly round up on Instagram and i am really enjoying seeing the month as a whole...even though only 9 pics means there are a lot of omissions...still, it's a nice flavour.

march saw the 2 main quilt tops i had been working on finished and quilted. that alone makes it a successful month in my book. 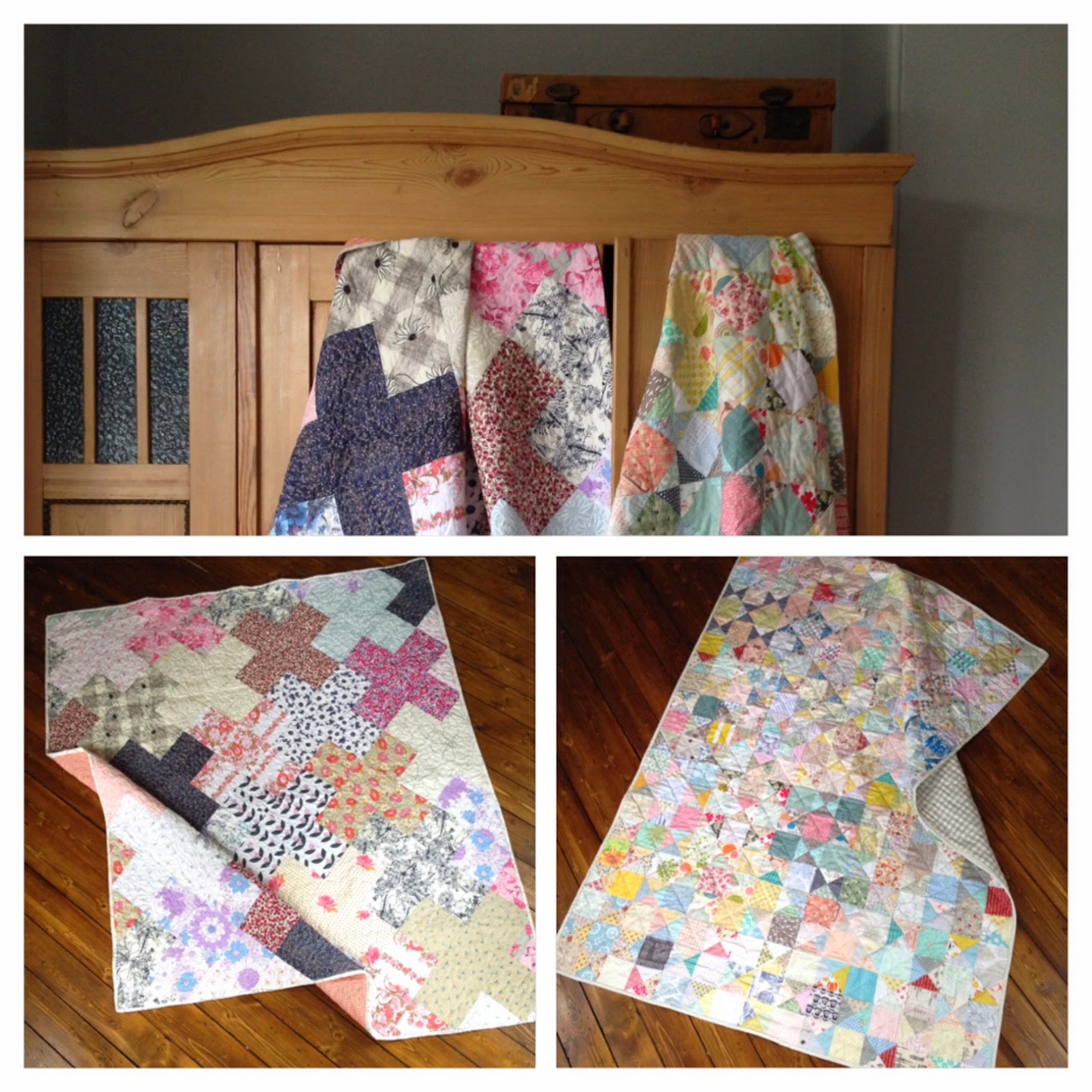 the one on the right is courtesy of my lovely Bee a Brit Stingy Flickr group gals and all the wonderful blocks they made for me. i just love this quilt so much.
the one on the left is the first of a series of "kisses" quilts. i wanted to try pluses on point...i like it...there will be more. in my casting not hoarding resolution of 2014 this one is for sale...or at least it will be when i get it listed in my Etsy shop...email me if you would like to know more.

speaking of Flickr...well i was before i got sidetracked...this month saw me finishing blocks for queen bee Sheila...but you will have to go here to see them as i appear to have lost that pic. Sheila is making 20 mini quilts for her grand daughter for a princess and the pea story...lucky Ava i say. they are going to be so darling.

march was also sending off time for the sewing room swap. i hit the jackpot super big time with these unbelievable makes and generosity from Carmen. i think i put Carmen through the mill with my solids/orange/lack-of-too-much-else requests. i honestly wouldn't have minded if she had deviated but i was floored when my goodies arrived. 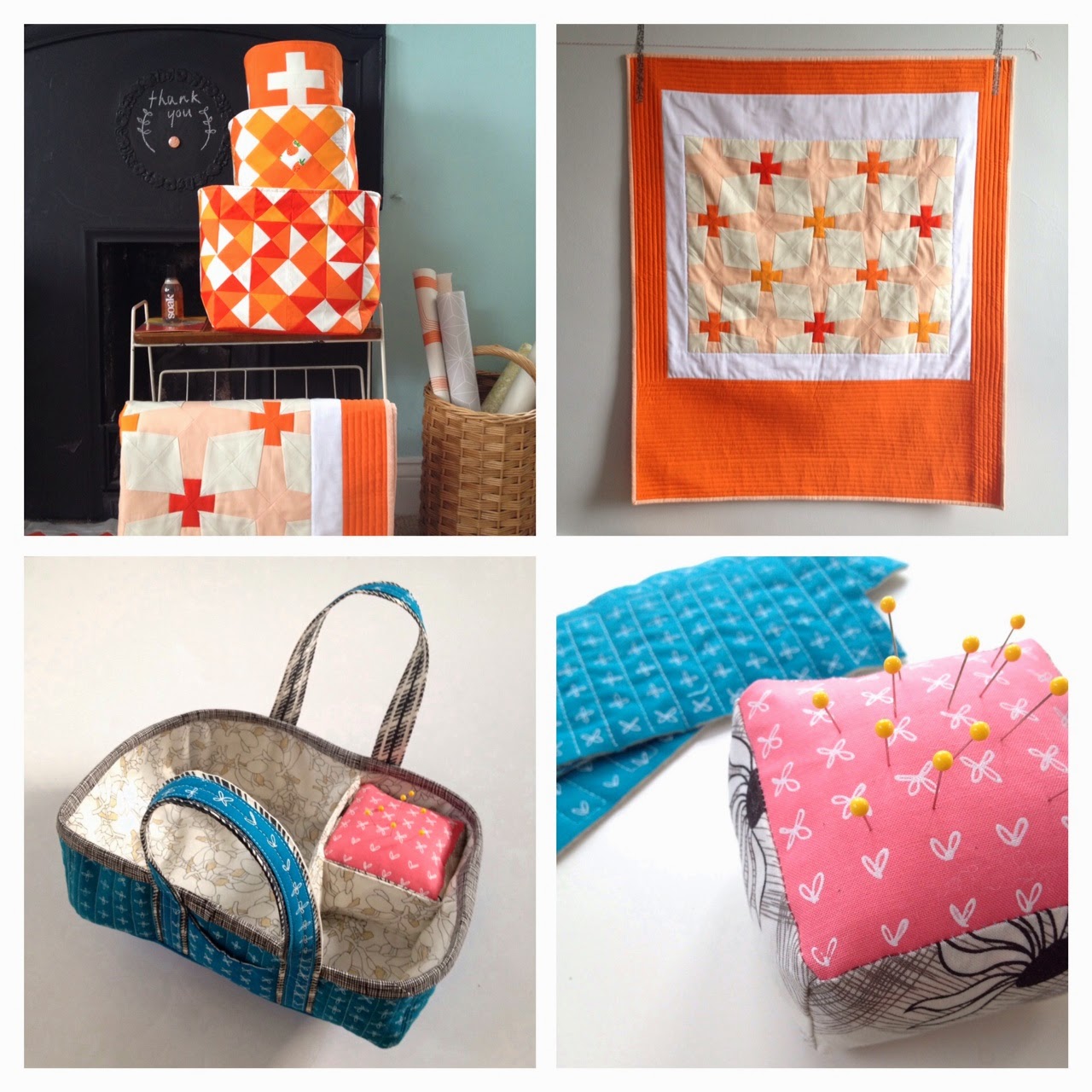 i, in the meantime, had been sewing a social tote for my partner. to say i was nervous about sewing for my partner is an understatement. i was sewing for Amy of Badskirt, someone whose work i admire greatly and am a huge fan of. seriously it was scary stuff. i really didn't think i was up to the job. Anyhoooo, the tote and pinnie and a bundle of other goodies that i sent her finally arrived in the land of Aus and Amy said all the right things and wooed more than enough, so hopefully i got away with it this time. nerve-wracking stuff tho sewing for one of your heroes.

march saw edition 2 of Blueberry Park Fabric Club. i can't tell you how much i love the Club. i love picking the fabrics and deciding which prints to use and designing projects for the members to try. i love folding the little pieces of fabric and putting them into neat piles! but most of all i love the feedback from the members themselves (thank you members x) and seeing the delightful posts of things people make with my fabrics. i seriously never tire of that. 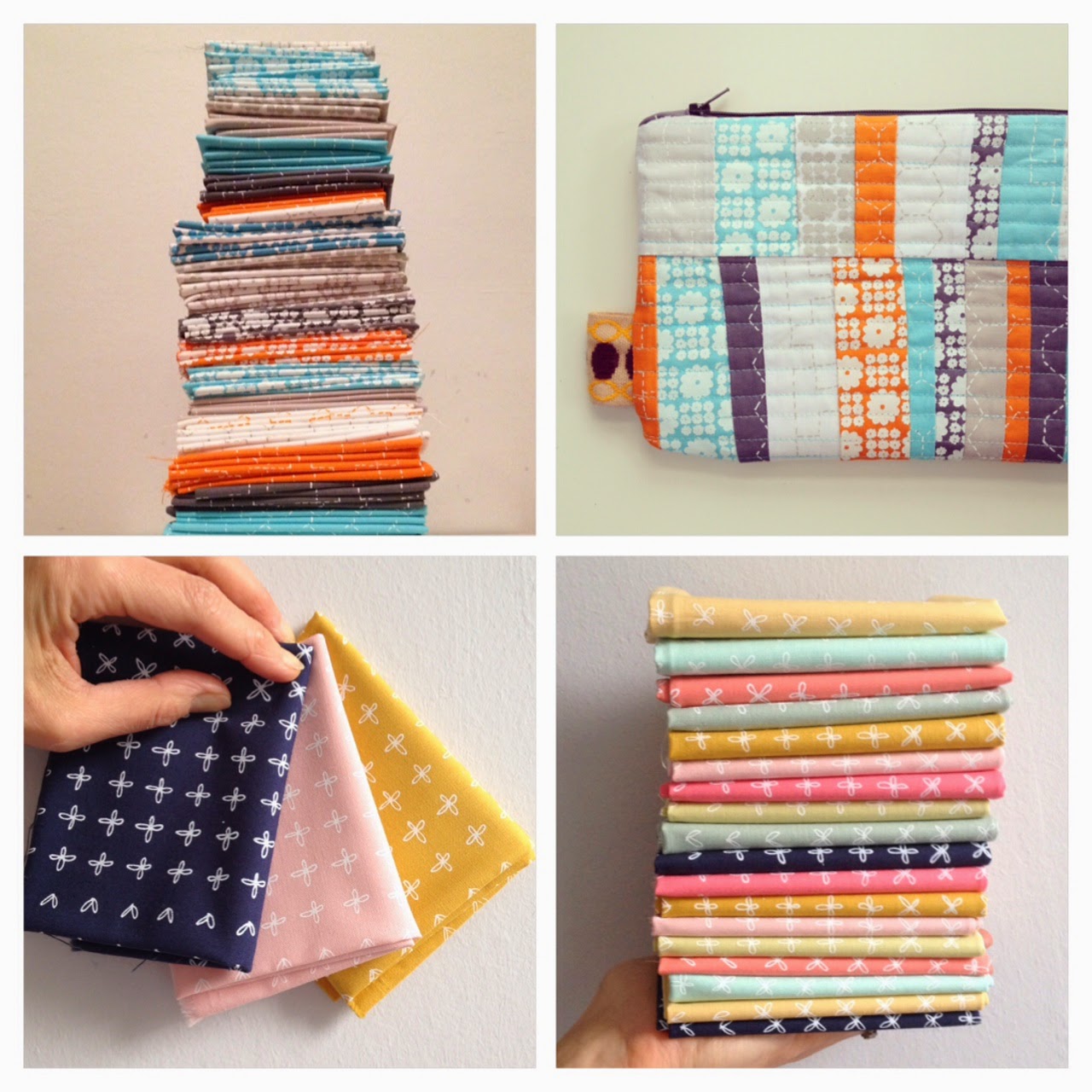 for those that don't know about the club, i produce a collection ever other month, which gives me just enough time to order fabric, print it up, design projects and send it out.
the next month is early May (2 pics above give a taste of what's to come) which means i am now finalising numbers and doing the above. if you would like to know more about it and sign up for the next edition go right here. there are a choice of size bundles...start small with a charm size to try it out...and have fun creating with my hand printed fabrics.

sign ups for this month finish on april 2, unless of course i print up too many, in which case you have plenty of time!

so that was march. april is already looking chocker with projects and commissions on the To Do List and several exciting things I'm working on too.
I'll be back sooner rather than later to tell you all about that.

Love everything in the photos - the quilts, the swaps - what you got, what you made

Only disappointment is Noooo! I have to wait another month????

I love your two quilts you finished, especially the one on the right. Your 'club' sounds great - I shall have to learn to quilt!! xCathy

blimey! Making for Amy? I would have been terrified!

Those quilt tops are stunning, congratulations. It must have been some pressure to have been stitching for Amy, but you needn't have worried you did an awesome job!

You are in some serious swaps there Karen, such pressure!!

Wow!! The orange gifts are wonderful, it is lovely to see so much effort and love in a gift. I love the quilts too, especially the one on the right.