I've talked before about the joys of blogging and how it enables us to find others that ordinarily are too far away to reach. Like all of you, I have met through blogging, Twitter, Flickr so many wonderful, talented people all over the world and closer still in Britain, who I consider to be my friends.
One such friend, is my very talented artist friend, Tara. Tara and I met a while ago now and whilst we have only met in person a small handful of times, I consider her one of my close friends. A day hardly goes by that we aren't in touch (normally on the scrabs board on Facebook it has to be said ;-))
We 'met' when we were both running our own online gift shops (Tara has subsequently closed Boutiko and is concentrating on her life as an artist). We instantly had a lot in common and became each others sounding board, helpline and general buddy. 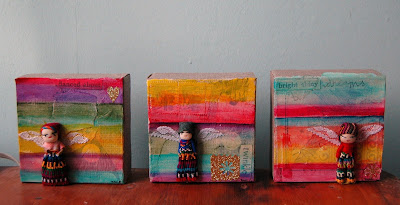 Tara, generally doesn't sew. She paints. I think this gave us respect for each others talents. Her work is amazing. It is generally mixed media and she uses a lot of wording in her work. She was doing a series of little dolls on canvasses that I just had to buy for Ruby's birthday. I'm still itching to give them to her. 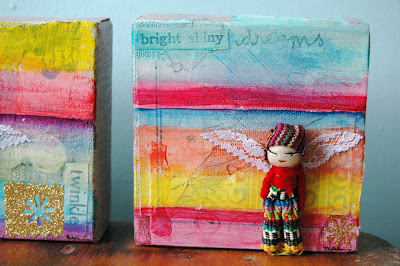 Tara came back from a recent trip overseas to new Zealand and was inspired to start her "Portrait of My Friends" series. They are so clever and beautiful and I loved them. It was around this time that I had begun my love affair with Log Cabins, which it seemed Tara had quite a thing for.
So our swap idea was born. I was going to do a log cabin for Tara and she was going to do a picture for me. Perfect! 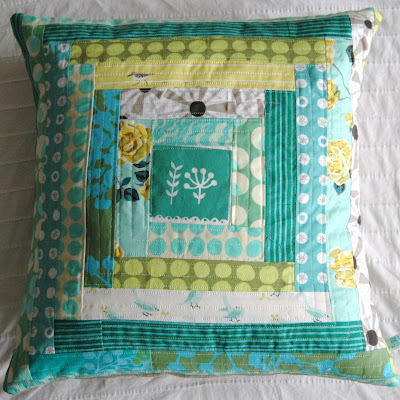 Tara picked the colours and I decided on the rest...a little like she is going to do for me. I finally had time to make Tara's cushion this week, although I am slightly perturbed by one thing...it looks too at home on my bed! 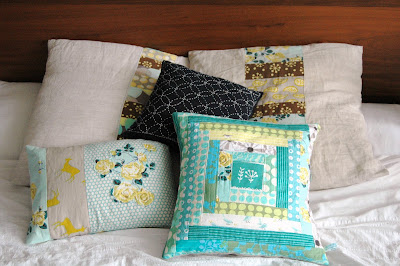 But this one is for my buddy Tara in celebration of why I blog.
Posted by Karen Lewis Textiles at Friday, July 16, 2010

Another gorgeous cushion. I can see why you're finding it hard to part with!!!

Those little doll canvases are amazing! I would love one. Great idea to swap a cushion for one - would she like me to make her something!!

Why a beautiful gift! I love your cushion and can totally understand why you'd like to keep it ;) It does indeed look very fetching on your bed, Karen. Lucky Tara... and I'm sure lucky you soon too. Kx

Taras artwork is fantastic as is your log cabin cushion Karen :)

What a great idea to swap! The canvases are beautiful and so is that lovely pillow!!!!! I want one too!!! I always enjoy seeing what you come up with next.

That's such a beautiful gift! I love both your work very much!

I loved reading this post. I think there's nothing better than creating something for someone special that you know they will enjoy. It's so personal and suck a lovely thing to do.

What a beautiful cushion. I love absolutely love that strip of yellow striped cotton with the bird on it in your log cabin

Hooray! It arrived this morning! I absolutely LOVE IT! Thank you so so much Karen for your genius swap idea; I really must get on with your painting! And thanks to all of you who've made such lovely comments about my work. :) Happy Weekend!x

what a beautiful pillow that you made for your friend. the colors are gorgeous. i can't wait to see what Tara paints for you.