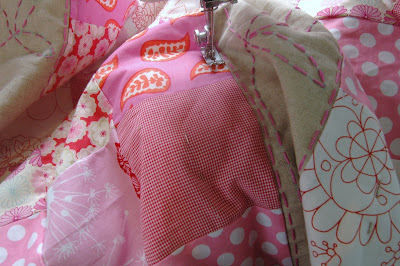 I've been working on Ruby's quilt this weekend and would have finished it if the sun hadn't been shining quite so much (I know, such an inconvenience). 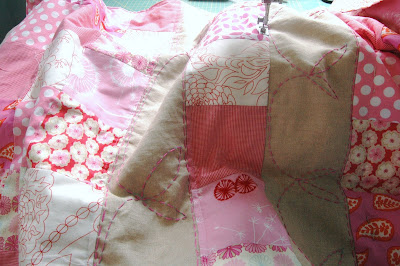 We had one of those weekends where everyone was just chilling and doing what they wanted. Our kids and the kids next door spent the weekend hopping from our garden to theirs and back again. We were never quite sure whether we had 6 kids about or none! 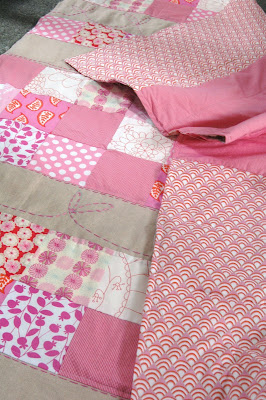 Because everyone was happily doing their own thing, I snuck some guiltless time in the attic and pieced together the quilt. I actually thought Ruby would be able to take it to bed last night but that didn't quite happen. It was one of those gorgeous evenings so all activities were temporarily halted when we decided to stroll up the road to our local Pizza Express. 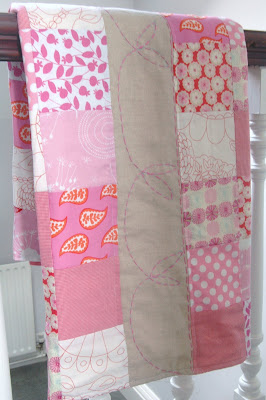 A shared bottle of wine later and children not in bed at a decent hour stopped any further progress being made last night. Since I had nothing pressing to be done this morning I decided to finish what was almost completed so at least tonight Ruby would have it. 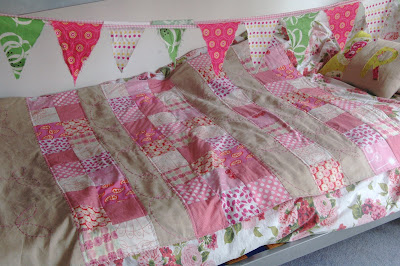 Translate that to mean a bribery to get one overtired little girl into bed at a reasonable hour, after her galavanting about far too late the night before.
Posted by Karen Lewis Textiles at Monday, April 26, 2010

Looks absolutly gorgeous Karen, I'm sure Ruby will be very happy when she comes home from school :)

That is lovely~ I made my daughter's quilts when they were about 8/10. They still love them even though they've outgrown them. This will be something she'll treasure!

Sounds like a perfect day. The quilt is beautiful, she's a lucky girl!

The quilt is utterly divine. Damn that sunshine though, huh?

It is beautiful! You have done an exceptional job Karen.

you are so stinking talented. it's a beautiful quilt and i love that bunting in the bedroom too!

Utterly gorgeous! I love your blog by the way, so inspirational x

this is so beautiful. the neutral strips really ground the colours. a quilt forever!

Ruby's quilt is so lovely and unusual. What a lucky girl!